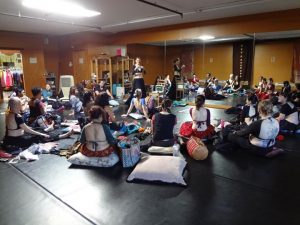 Greetings,
Thanks for joining me, there’s something that I want to share with you.
When I first released Tribal Basics Vol. 1 Dance Fundamentals, I encouraged the viewer to “use these ideas in your version of American Tribal Style Belly Dance.” At that moment, I had no idea that ATS would become a worldwide phenomenon. I had no thought to control it, I just wanted to get it out there for people to enjoy. I assumed that you would see it, be inspired, and go on to create a dance that followed, what was to me, the obvious aesthetic and lines of classic female beauty.

Imagine my surprise when my little ATS morphed into so many interpretations of “Tribal.” At first I was delighted, so many people were coming on board. I faced a lot of criticism from the traditionalists who feared that the public would regard Tribal as more authentic than Oriental Style. I stood my ground in that I wasn’t trying to steal anyone’s market share, I just had a new idea that knew would add to the growing population of students interested in belly dance. People like me, that loved the music and culture, but felt a resonance to the romantic idea of a more folkloric looking dance. The music we chose was more from the countryside than the city and we also experimented with sounds from other cultures, as well as modern fusions that were emerging in San Francisco and other progressive cities. The costume was rich and heavy; full skirts, pantaloons, a version of the Indian choli top, mythical coin bras and tassel belts, and of course a full cloth headdress and lots of jewelry.

As things evolved in our San Francisco classes, I came up with the signature concept of ATS-group improvisation. We used standard belly dance steps, and made up some of our own based on those steps, but what was new was the way that we used them in set formations. We decided on duets, trios and quartets, with the occasional solo, to be performed within the context of a chorus line of troupe dancers. The posture and steps would remain a solid, unchanging core but the way the dancers used them was the improv part-the leader would cue the followers as to her next step and the whole formation could change in unison.

This is still a mystery to audiences, the whole group flows so seamlessly that it is often impossible to tell that it’s improv. Perhaps that’s the one hitch in ATS, the most amazing part is hidden from the onlookers.

Onward to the reason for tonight’s talk.
I never intended to have to police the dance. I expected that everyone would play nice and respect each other, and me. But something happened in the mid-nineties. The desire for the dance had begun to spread and more and more people wanted to learn. I was invited to travel, but had no interest in it at the time. If I left San Francisco, the business would fall behind. Plus, I didn’t consciously know it at the time but I wasn’t done creating the dance. Truthfully it felt, and it still does, like I was just a tool of the dance goddess. Not to sound cliche`, it was just that I had no personal plan other than to dance for a few years. It feels like something bigger than me just plucked me out of the masses and said, “Go do this.”

But the bubble burst when students started splintering off and teaching right around the corner from me. That felt wrong. I would never have opened up shop if my teacher was still on the scene. I decided not to take a stance, not wanting to appear petty and more importantly, not wanting to put a damper on the progress of the dance.

But here’s the deal-it felt as if just when I was preparing to give a gift…it was snatched out of my hands. I was attempting to be humble in giving the dance away, not feeling the need for ownership, as

I assumed that would naturally be attributed to me out of courtesy. But it was not to be. I was stunned, hurt, angry and too proud to say so. I retreated.

I waited and watched to see what would happen. It was pretty rough for a while. All sorts of dances were being created and called “Tribal”, some even “ATS”, which made no sense to me as there was nothing ATS about them at all.

I realized that people who had no experience with ATS were jumping on the bandwagon. It made sense to remain in the game and encourage people to call these new styles simply Tribal. Most people added a prefix or suffix, like Fusion, Gothic, East Coast, etc. Attempting I believe to stay under the umbrella of the popularity of Tribal while distinguishing themselves as original at the same time.

Makes no sense to me, but OK.

Eventually, the very people that turned away from me, or perhaps I should say the next generation of students of the original diaspora, started to recognize the true ATS, and me. I felt like it was worth the wait. I’m glad I didn’t speak out against those that had broken away. And I’m glad that we are on track again.

A digression for a history lesson of the ATS underground, finally here is the reason for tonight’s talk.
Things are good right now. There is still some confusion about what is ATS and what is any variety of Tribal, but that’s OK. We have Sister Studios, teachers that adhere to the philosophy of FatChanceBellyDance in their ATS classes, 98 at the time of this writing. We have TribalStar Galactica, my attempt in getting all the “tribes” together in one place, no matter of the genre, 247 at the time of this letter.

It’s finally time for me to give the gift that I had intended at the filming of Dance Fundamentals-be creative and have fun.

There will be new steps added to the ATS vocabulary, but they will not be mandatory. As well, you are free to create new steps and variations of your own. You can show them to me, or not. I am always happy to give a common sense creative critique on what makes a good ATS step, but you will not get in trouble if you are moved to create something on your own.

As one dancer recently brought to my attention, we all have our own dialectics. By the nature of either distance, ala FatChance and Devyani, or simply a student group that dances together on a regular basis, we develop our own creative steps and variations (more on how to do that at the end of this letter.) The dance is the same but experimenting and mistakes lead us to create, and that’s a good thing.

But here’s the deal; if you choose to create your own thing you will not be able to flow with another ATS dancer that you have never danced with before. What do I mean by flow? Flow is when both dancers have the same muscle memory for steps, interpret the music in the same way, have a similar skill level and use the ATS formations of duet, trio and quartet. Flow is dancing in the divine subconscious. But if you have one version of a step and another dancer has a different version, you will have to discuss it ahead of time and you will have to think, or stay in the conscious while you dance. This is not a bad thing, but just be aware of it.

I’m still on the scene. I will still be teaching ATS all over the world. We will continue to produce instructional DVDs. I’m not going anywhere. In fact I’m just sitting here on the porch and I invite my dance family to come and play in the front yard. Show me what you are doing, tell me how it has changed your life, share a new piece of music with me. Just come home for a spell and let me enjoy your happiness. Then you can run off to the next house and create yet again.

Anatomy of a Step.
In June of 2011 we will shoot the next instructional DVD, to be released in the Fall. It will be titled Anatomy of a Step. We’ll introduce you to the new work that we are doing as well as that of guest artists. The theme of this DVD will be to introduce you to the process of creating steps and variations. But for now, use this formula: the posture does not change. The ATS Old School steps remain the core. The result of a new step reinforces the aesthetic of uplifted arms and joyful display of the body.The step conveys happiness. Any cues should be brief and logical, the more “rules” you have to add, the less successful the step will be. The principals of non-verbal communication govern all cues and formations.

I think that if you follow these suggestions you will have success, and I hope find more depth in the dance.

My friends, enjoy the dance. And phone home every now and then.